Confirmed: Cardi B coming to perform in South Africa 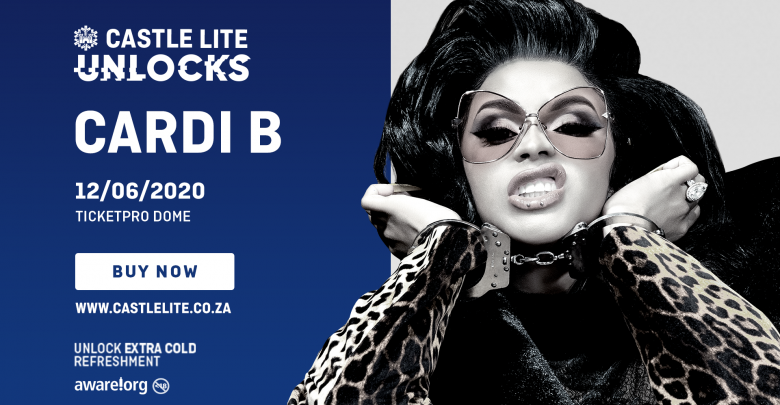 Confirmed: Cardi B coming to perform in South Africa

Castle Lite has revealed that US female rapper, Cardi B will headline this year’s Unlocks experience at the TicketPro Dome in Johannesburg on 12 June 2020.

Cardi B fever has hit Mzansi – so much that it crashed a tickets website in seconds.

On Thursday at 3pm, just four hours before the American rapper was announced as the headliner for the 10th anniversary of Castle Lite Unlock concert, South Africans flooded the official website to secure early bird tickets.

This is a big year for Castle Lite Unlocks as the brand not only celebrates a decade of making a bigger contribution to African Hip-Hop than any other brand, but also a decade of having given local fans of the genre, a once-in-a-lifetime opportunity to see their favourite chart-topping stars such as Drake, J Cole, Chance the Rapper, Kanye West, Travis Scott, Post Malone, and Meek Mill. And now Cardi B’s performance marks a triumphant 10-year anniversary of the Unlocks experience.

The limited tickets cost a low price of R50 at 3pm, with an increase of R50 every 30 minutes until her name was revealed at 7pm. But frustrations and annoyance quickly ensued as users experienced random crashing, freezing and the message “we do not have enough tickets for sale”.

“Who actually got a ticket? I feel like no tickets were sold at all,” @MuloiwaThendo asked on Twitter.

“You guys lied to us… how can tickets not be available within few seconds?” @Pride_Hilfiger tweeted.

The Bodak Yellow and Money hitmaker will hit the stage at TicketPro Dome in Johannesburg on June 12.

We definitely cannot wait for the experience!